CAJE 33 is Off and Running

After a rainy morning and afternoon to complement Tisha B'Av, CAJE 33 finally got in gear, beginning with an opening keynote-that was supposed to feature Dennis Ross. As Ambassador Ross was unable to come, conference chair Joel Hoffman ably filled in with an inspiring history of the Jewish people and inspiration for the coming week of CAJE.

Later in the evening, attendees gathered in 7 locations for the first part of the StorahTelling-designed opening program transitioning from Tisha B'Av into CAJE - from Mourning to Light. Later, all the groups came together for a fine presentation from StorahTelling. Some really great music was provided by Chana Rothman and friends. Sadly though, the sound system wasn't up to the task of handling either the StorahTelling presentation or a rockin' closing song from Chana, and it was hard to hear very much.

While there were other activities following the opening, many of us drifted over to 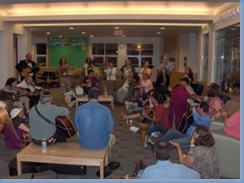 the University South lounge for the first of what promises to be 4 days of great informal unofficial after the official late night kumsitz late late night kumsitz sessions. I've posted a bunch of pictures of the well attended kumsi tz on cajenet. When I left around 3:15am, only a few hardy souls were left. And we'll do it again the next three nights. After all, it's CAJE. who needs sleep?