My name is Ozymandias, King of Kings:
Look on my works, ye Mighty, and despair
-Percy Bysshe Shelley

King of Kings am I, Osymandias.
If anyone would know how great I am and where I lie, let him surpass one of my works".
-Generally accepted translation of the inscription on a fallen statue in the Ramesseum, Luxor, which Shelley paraphrased for his poem

Ani rishon, v'Ani akharon, umibaladai ein El”him.
I am the first and I am the last, and there is no G”d but Me.
-Isaiah 44:6b

So what do these all have in common? The plain connection should be apparent. The arrogance and haughtiness of any Egyptian Pharaoh, Shelley's ironic juxtaposition of these words in his poem, and G''d's simple statement that G''d was here first and will be here long after we're gone.

The full text of Shelley's poem makes clear the irony through the description of the setting:

I met a traveler from an antique land
Who said:—Two vast and trunkless legs of stone
Stand in the desert. Near them on the sand,
Half sunk, a shatter'd visage lies, whose frown
And wrinkled lip and sneer of cold command
Tell that its sculptor well those passions read
Which yet survive, stamp'd on these lifeless things,
The hand that mock'd them and the heart that fed.
And on the pedestal these words appear:
"My name is Ozymandias, king of kings:
Look on my works, ye mighty, and despair!"
Nothing beside remains: round the decay
Of that colossal wreck, boundless and bare,
The lone and level sands stretch far away.

As to the quote from Isaiah, it is from the haftarah for our parasha, Vayikra. The parasha describes, at great length, ritual sacrifices. In the haftarah, the people are chastised for abandoning those very practices. And in another connection, which the rabbis really seized upon, the parasha speaks of the obligation of one who has witnessed, or in this case, heard, a public blasphemy, that person is obligated to testify. If they do not testify, then they bear guilt for which they must confess and offer sacrifices. And in our haftarah, just a few verses after the quote we have used, is another famous quote:

OK. So what's the other quote, the direct rendering of the text upon which Shelley based his poem? What is its connection? Aha. 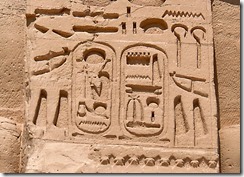 Pesach time is approaching. One of the "major characters" in the maggid of Pesach is Pharaoh. Which Pharaoh, we don't know. Traditional scholarship had once held to the belief that this Pharaoh was Ramesses II (aka Ramses II, aka User-maat-re Setep-en-re, which, poorly transliterated into Greek comes out-in English transliteration-Osymandias.) While most scholars no longer believe that Ramesses II could have been the Pharaoh of the biblical exodus, the traditional understanding remains popular. (User-maat-re Setep-en-re is part of the throne name of Ramesses II, of the 19th dynasty, who ruled Egypt from 1279 to 1212 BCE, or 1290 to 1224 BCE, depending upon which chronology you accept.) Ramesses II is also known as Ramesses the great, as his reign was quite remarkable, producing many monuments, and having great prosperity (not to mention his 8 wives.)

Yet how much like the biblical Pharaoh of the exodus is this Ramesses II, this Osymandias appears, if he is like the one in Shelley's poem, the one self-described in the inscription found at Luxor. His statues and temples and obelisks have mostly cracked and fallen or even disappeared. Ironically, his name does indeed still live on-as his works have lasted long enough for archaeologists to find them. That's a pretty darn long time. About as long as Judaism, in some form, has been around. Seems we've fared a bit better than Osymandias, though we've suffered from far more than sand withering us away to ruins.

Provided, that is, G''d has someone around to be G''d's witnesses, for, as it was written:

Osymandias' name still lives, because we were around to read his inscriptions. When we're gone, who will remember Osymandias? Yet Osymandias only thought he was G''d. what about "the real thing?"

Now that's something to ponder.

At least, that’s where I left it eleven years ago. Now, in this time, it feels incomplete.

To begin with - who was around to witness for G”d before G”d created us? If G”d’s existence is dependent upon our witness, there is a logical inconsistency here. Perhaps it was only the act of our creation that generated this mutual dependency? Hm. That’s feels awfully anthropocentric. A mutual Deo-anthropocentricism? What if there is life elsewhere in the universe? (A friend of mine suggested, the other day – that perhaps life arose spontaneously elsewhere in the universe, but on earth G”d specifically interfered. Could it get any more anthropocentric than that?)

Is the mutual dependency between G”d and humanity to witness for each other at the center of why G”d really spared Noah and his family?

Oy, my head is exploding, And that’s not even the stuff that got me started down this path for my musing this year.

These are trying times. It is hard to be optimistic, hard to feel positive – even about G”d. Yet it is a time when, perhaps, we need G”d even more, and therefore we must bear witness to G”d.

That is not an easy thing to do. As I was reading through the haftarah this week, I found myself in the most cynical of moods. It’s easy, I think to myself, for G”d, through Isaiah, to pontificate (and I choose that word even knowing all the modern baggage that comes with it) and tell us that are idols are worthless, and cannot help us or do anything for us. So I find myself thinking “oh yeah, Mister invisible, incorporeal G”d, like we can be sure you can do the things that you say our idols can’t or won’t? If my idols don’t help me, I can just throw them out and get new ones to pray to. If I pray to you and don’t get the help I need, just what am I supposed to do? What’s that? It’s all part of Your plan? You’re ineffable, and we puny humans just can’t comprehend your ways? Yes? Yes, we’ve all read the book of Yonah. We’ve also read Qohelet. Are you really just trying to confuse us. (Or maybe there really is something to this “ineffable stuff.)

Yeah, yeah, we know. You freed us from bondage to Pharaoh. But in the process you made all the Egyptians serfs to their own leader, you were off somewhere else diddling while we suffered for 400 years, and then you keep hardening Pharaoh’s heart so his people have to suffer even more?  I’ll just bet there really were at least ten good people in S’dom and You destroyed the place anyway.

But…but…but. Man, I just gotta stop this. I’m making myself more miserable. I need to find a rainbow here. A reason to be G”d’s witness right here, right now, because G”d knows we need that right now.

Is that how we witness You? It’s not about avowing Your miracles, compassion, mercy, and all those other attributes. It’s about being Your witnesses by being the kind of people You have asked us to be.

This still begs the question of what happens to G”d if there is no one left to witness for G”d. It’s no longer enough to ask if G”d can create a a rock too heavy for even G”d to lift. Now we must ask if G”d can create a universe which will eventually have no need of G”d and G”d will therefore cease to exist but the Universe G”d created will carry on? Might that be the highest achievement of a universe-creating G”d. to obviate the need for itself? Could G”d become Osymandias in G”d’s own universe? But for all the right reasons, instead of the wrong ones? (Not that G”d, as described in Torah, is without vanity.)

I’ve opened yet another theological wormhole for me to fall into. Help. Time to him my LifeCall! I’ve fallen and I can’t get out! Lucky for me I have this alert button. It connects me directly to Torah, to Shabbat. To G”d. Seriously! As G”d is my witness. Oh wait…

Other musings on this parasha:

Posted by migdalorguy at 9:28 PM